With less then 72 hours left, we are really hoping we make our kickstarter goal. Be sure to check out the 10th update, or if that update sent you here, welcome. It was really great working with Athena Studios, and creating Sophie and I would really love to see this feature take off!

Our Kickstarter Again is here:

Also here is a cool making of photo so you can see the puppet in progress! 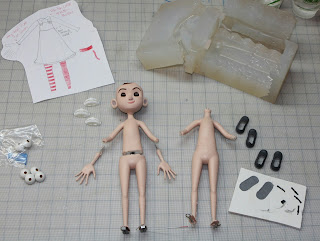 Now into toys, ApeCon was a success, and we have the Santa Rosa Maker Faire this weekend! More photos to follow! We are also revamping our elephant toy and he will be available for purchase very soon!
Posted by Unknown at 7:46 PM No comments:

I have spent the past summer working hard making puppets, and toys.

First lets talk about the puppet! Her name is Sophie and she is a young girl living in New York, who discovers a magic elevator. She is based off the character from best selling book "Auntie Claus." Athena studios purchased the rights to "Auntie Claus" and we are now working to turn it into a feature film. We put together a pitch package, and you can for the next 6 days only! Donate money to our Kickstarter, and help fund the next big christmas movie in stop motion!! You can view our kickstarter here:

Give Monies to Auntie Claus here!


Why give Athena Studios, and Auntie Claus your money?

When funding our kickstarter you are in the short funding our pitch package, but in the long paying all the artist who put their efforts, heart and soul into this project, and also funding a new start up stop motion studio. While we want to have Auntie Claus made into a feature, we also want to grow Athena Studios into a 200 person strong studio, that can do all kinds of stop motion work, and other commercial work. I believe in Athena, and this project, and want desperately a studio to call home.
What's great about Athena, is I have never worked with such a passionate group of people who really want to produce good quality and entertaining art. You can get a better look inside Athena Studios, at our make video below (P.S. make it to the end for a glimpse of me and my work station!):

Ape Con! We will be at Ape Con this weekend,
for more info click here:
Ape Con Website

ApeCon marks the one year anniversary of Rawrztoys starting the convention circuit! We have had a pretty good year, and I would like to thank all of our fans, for their continued support as we grow!
Check back after the weekend for some updated photos!